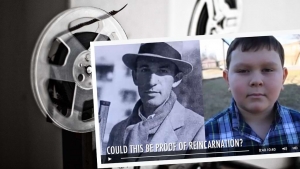 This lesson covers the topic of reincarnation. What happens after you die has been a subject of debate amongst people for millennia, and many of these beliefs are strongly conditioned by culture. While the idea of reincarnation is common in many Eastern cultures, it is not a widely held belief in the West. However, there is growing empirical evidence that some children have such detailed and specific memories of past lives that could not be possible to fabricate on their own. Is this evidence of reincarnation, or is something else going on?

At the tender age of five, Ryan Hammons told his mother that he remembered being someone else. He recalled traveling the world, marrying five women, dancing on Broadway, and becoming a successful Hollywood agent.

He started opening up to his mother, Cyndi, about his previous life. He even asked his mother to take him home to Hollywood. His stories were so specific, his mother decided that there had to be something to them. Even though she was Christian, she began to consider the possibility of reincarnation.

Cyndi kept Ryan’s stories secret for fear that people would think he was loopy. But she wanted to understand her son’s memories. So she started looking through books about Hollywood. It was in one of these books that Ryan pointed to a man in an image from an old movie. He excitedly said, “That’s me. That’s who I was.”

Shocked, Cyndi went to Dr. Jim Tucker. Tucker is a professor and child psychologist at the University of Virginia School of Medicine. He has spent much of his career studying children who have memories of past lives. Tucker, with the help of a film archivist, discovered the name of the extra who Ryan had pointed to. His name was Marty Martyn, and he was a successful Hollywood agent who’d had five wives, traveled, and danced on Broadway. After further research, a list of 55 of Ryan’s memories including the street Marty Martyn lived on were proven accurate.

Ryan is one of many children with past life memories. Tucker’s team has studied over 2,500 such cases.

Researchers have found that traumatic deaths seem to create an emotional imprint in the next life, which makes it more likely that a child will remember. And it can also have a psychological impact. For example, those who drowned in a past life may have an “irrational” fear of water.

Buddhists and Hindus, among others, believe in reincarnation. Although Western culture has typically dismissed it, it is beginning to gain a small foothold. In fact, some therapists have begun practicing past life regression. They believe it helps patients heal by remembering and sometimes resolving traumas from past lives. Even many skeptics say that these sessions provide them with interesting perspectives, which help them to deal with issues in their lives.

While reincarnation might not be the only explanation, there is growing evidence that something strange is happening. As Dr. Tucker reminds us, “These cases demand an explanation. We can’t just write them off or explain them away as just some sort of normal cultural thing.”