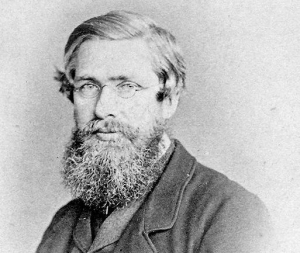 Charles Darwin, sometimes called the father of evolution was actually a co-parent in the groundbreaking theory of evolution.

Interestingly, Darwin was influenced by a man called Alfred Russell Wallace, a follower of spiritualism. Spiritualism is defined as “a system of belief or religious practice based on supposed communication with the spirits of the dead…”

Wallace was also a Welsh scientist and explorer. He thought of the idea of evolution independently of Darwin. They say lightning never strikes twice. In this case, it did.

After a five year voyage around the world, Darwin developed the theory of natural selection in 1838. For 20 years Darwin’s theory gathered dust. It remained unshared and unresearched.

One day in 1858, Wallace came down with a fever. In his sickness, the explorer had a crystal clear moment of clarity. It dawned on him that species evolved following a set pattern. The fittest survive because they adapt to their environment.

Wallace wrote his thoughts in a letter to another scientist he admired – Charles Darwin.

Encouraged by Wallace’s ideas, Darwin dusted off his old theory. He published a joint paper with his fellow scientist in 1858. It presented the theory of evolution and natural selection in detail.

In 1859 Darwin published the revolutionary theory in a book that would make him a household name.

Darwin was keen to emphasize Wallace’s role in his theory. Wallace was not bitter about his fellow scientist’s success. Instead, he publicly supported him and admitted to being his biggest fan.

In later life, the two scientists remained at loggerheads about one thorny topic: the issue of spirituality.

Both agreed that all living things evolve. Yet, Wallace believed natural selection could not account for humanity’s greatest gifts. He believed artistic, musical, and mathematical talent were products of the eternal soul.

Wallace’s belief in spiritualism caused great damage to his reputation. Yet he marched to the beat of his own drum.

Wallace believed the survival of the fittest was the building block of life. He also believed the development of the human spirit was the raison d’être of the universe.

Wallace was also a keen social activist. He once wrote, “Those who succeed in the race for wealth are by no means the best or the most intelligent.”

Ironically, the theory of evolution is often used in support of atheism. Until his dying day, Wallace remained an ardent defender of evolution. He also left this life a committed spiritualist. The man saw no contradiction between the two beliefs.