[I made a rule that animals are not allowed inside my building.]

[In some places, people can choose who is part of the government.]

[Many of the government rules prevent people doing bad things.]

[I enjoy making machines, but it can be difficult work.]

[If you give me some money, I will give you my two animals.] 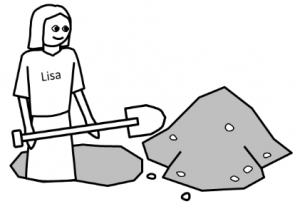 Someone promised to give Lisa some money if she makes a hole in the ground.