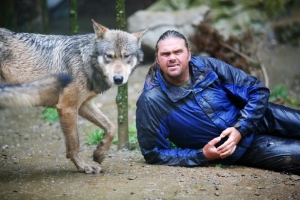 Wolves are very powerful and sometimes dangerous animals. They can easily break bones and kill humans, but Shaun is not afraid of them. For almost two years he lived, slept, ate, played and hunted with a family of wolves in England. For twenty-four hours a day, seven days a week, he lived the life of a wolf. A family of wolves is called a pack’. Shaun didn’t only join a pack of wolves; he became their leader. 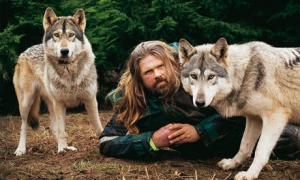 Shaun grew up in a rural part of England. The local animals were his friends. At a young age, Shaun watched how the local foxes lived. As a young man, one of his first jobs was working in a game preserve. A game preserve isn’t a normal park. A game preserve is a place where animals are kept for hunters to shoot and kill. Shaun loves animals. He didn’t want them to die. He fed them and planned to help the foxes escape. When his boss found out, he was fired.

Later in life, Shaun joined the army and became a soldier. This experience as a soldier made Shaun’s body and mind strong. This prepared him for the tough life of living as a wolf. After the army, Shaun returned to his love of wild animals and became a wolf researcher. He first learned about wolves from Native American Indian researchers, who studied and respected wolves. He spent seven years living with Indians and learning about wolves and how they communicate.

After living in America, Shaun returned home to England and began working with wolves in a wildlife park. In the park, one of the wolves had three babies.

For some unknown reason, the mother wolf rejected these babies. This was Shaun’s chance to start doing unique animal research. Shaun became their mother, brother, teacher, and leader. 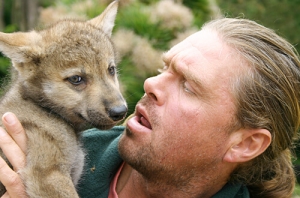 He first taught these young wolves how to speak like a wolf. Wolves make many different sounds to communicate. Shaun learned all about this wolf language from the Native Americans.

Each wolf has a unique locating sound, which is like a name. When the wolf pack hears this sound they know where their brother or sister is located.

Shaun also taught the wolves how to hunt and eat. This is maybe the most dangerous part of Shaun’s job. Shaun is the leader, so he eats first and he eats the best parts, the heart and liver. Raw liver is hard for a human to digest, but Shaun must eat it or the other wolves will not respect him as their leader. Sometimes Shaun secretly takes the liver out and lightly cooks it first and then puts it back inside the dead deer before eating. This is very difficult because wolves have a very strong sense of smell. The wolves will know the liver is not raw if Shaun cooks it too much. If they know he isn’t eating raw meat, they will not respect him as a wolf leader. While he eats, the other wolves challenge him. They show their teeth and make scary snapping sounds at Shaun. They could attack Shaun anytime, but he must defend his meal and show no fear. Shaun looks like a wild animal when he eats. 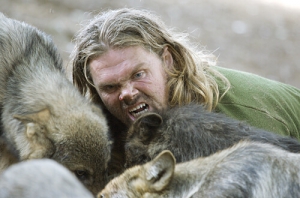 He tears into the bloody dead deer with his hands while he eats the mostly raw meat. He growls and snaps his teeth to keep the other wolves away. Shaun is truly the wolf pack leader. Only after he finishes eating he will let the other wolves eat.

Violence within wolf packs is common and Shaun was bitten many times. The first few times, he went to the hospital and got stitches. After he returned from the hospital, the wolves always tore the stitches out and licked his wounds. They didn’t want to hurt Shaun. They wanted to take care of him. Shaun later learned that wolf saliva has a healing effect that speeds wound recovery. Shaun believes that the rough life of living outside with the wolves, eating raw meat, and the healing effects of wolf saliva have made him stronger.

Shaun continues to care for his wolf pack in England and continues his unusual research on the way they live. Wild wolves have been completely killed off by humans in many countries, including England. In other parts of the world they are in danger of disappearing. Shaun deeply respects these wild animals and his main goal is to protect them. He has already had some success.

His research on wolf language has already stopped some farmers from killing wild wolves in Poland. He hopes to continue studying and using his knowledge to help humans and wild wolves live together more peacefully all over the world.